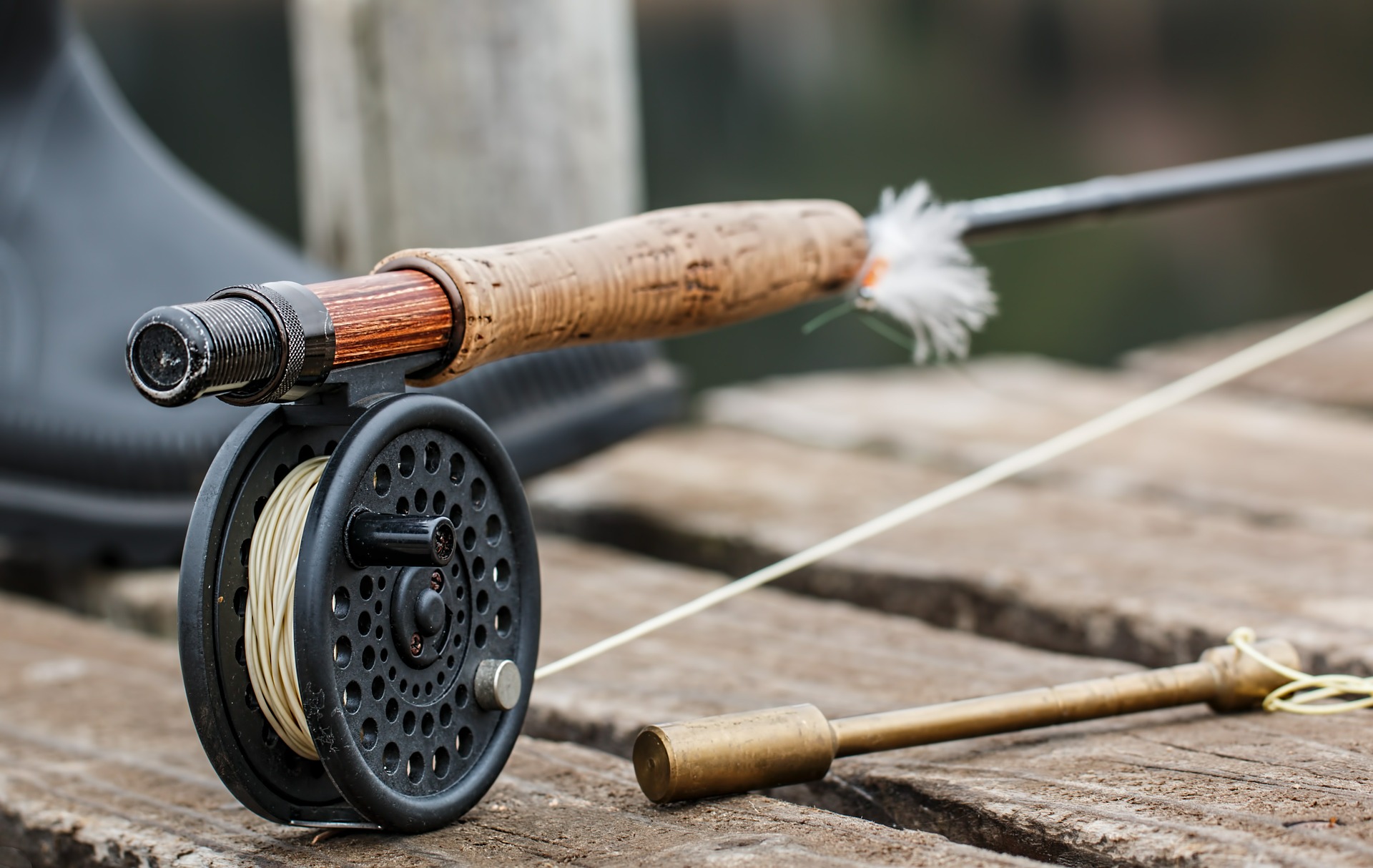 While tenkara has existed in Japan for centuries, it’s recently become a very popular alternative to traditional western fly fishing. Many of the techniques and principles are the same, but there are key differences. The most apparent is that in tenkara, there’s no reel of line. Instead, a fixed line is tied to the tip of the rod.

They have their differences, but both techniques are trying to do the same thing. Unlike spin fishing, which uses heavier lures and bait, they cast very light flies. They’re able to do this both because the rods are very flexible and because they line itself is heavier than normal fishing line.

Both techniques developed separately, but have many historical similarities. In fact, tenkara is a window into what western fly fishing used to look like. Up until the 19th century, it was extremely common for fly fishing rods to be reel-less, like tenkara rods now. Fly fishing has been a popular pastime for centuries, and it’s fun to look at old paintings and woodcuts that show the techniques of bygone eras. Many of them look strikingly similar to what we know of as tenkara.

While rod-and-reel fly fishing took over in the 19th century and became the dominant form in the West, the reel-less style left its influence on technique. As many western fly fishermen pick up tenkara, in many ways they’re re-discovering their own roots!

All of this is not to say that tenkara is “primitive” or “behind the times,” another somewhat popular assertion from detractors. There are very good reasons why Japanese fly fishing didn’t adopt the reel. The biggest (well, maybe smallest) is that the traditional tenkara fishermen aren’t going after the larger trout and salmon found in big rivers and lakes. Instead, they were fishing the mountain streams for smaller fish, where the ability to let a strong fish run for a while was less of a need.

Another big factor was the availability of bamboo for making rods. Bamboo naturally grows long, straight, flexible stalks perfect for making a fishing rod. Their ability to bend without breaking puts less strain on the line and rod. It also gives more resistance to a hooked fish. Europeans, without this natural resource, had stiffer rods, giving rods with reels a distinct advantage when fighting fish.

All of this is to say that there is nothing new under the sun. While it may seem like a modern fad now, tenkara is actually based on older forms of fly fishing, and very closely related to historical fly fishing in the western world. It may take a little getting used to, but if you swap out a tenkara and western fly fishermen’s gear, they’ll both adapt fairly quickly.

The quintessential fishing method is the simple stick with a line tied to the end, often called “cane pole fishing.” It looks very much like a tenkara rod at first glance, and many people can’t see the difference. Many strident anglers partial to western fly fishing have deemed tenkara just a variation on cane pole fishing.

There are a major differences, though. Cane poles are used with bait along with weights and/or bobbers. These are much heavier than the flies used in tenkara. There’s also a much different presentation in most cane pole fishing. Often, it’s just plopping the bait into the water. Finally, cane poles are not usually used for trout, often targeting panfish, bass, catfish, and carp.

All this means that cane poles are usually much, much stiffer than tenkara rods. They are not built to cast a fly line, and they won’t do that very well. Cane pole fishing can be a lot of fun, but it is very much not tenkara, no matter what western fly fishing partisans might tell you.

Tenkara has a minimalist philosophy that gives it a very simple vibe. But too many people equate “simple” with “easy.” This couldn’t be further from the truth. Simplicity can also mean that you have to rely more on technique than on gear.

In fact, it could be argued that tenkara is more difficult than western fly fishing. Landing a fish is certainly different without the ability to reel it in. And not being able to cast long distances means you need to be better about spotting and getting close to trout.

It’s true that many beginners find tenkara to be easier at first. With fewer moving parts to worry about, once you’ve got the casting motion down, you’re well on your way. Learning about false casts, stripping, and other techniques you can use with western fly gear can look intimidating.

But it’s also true that some people find tenkara too limiting in certain situations. Maybe they caught too big a fish, and it snapped their line or rod. Maybe they are in a lake or pond and want to get further out than their fixed line lets them. Suddenly, what seemed simple and easy becomes more difficult. Some will say that there’s fun in working around those limitations. But anyone who’s done it will tell you that tenkara is certainly not just an easier way to fly fish!

Many traditional fly fishermen argue that while they can fish anywhere a tenkara angler can, but not vice versa. Tenkara fans might quibble a bit, but this is generally true.

Tenkara was developed in the mountain streams of Japan, and is well-suited to that environment. But when the rivers get larger, or if you’re talking about lakes and ponds, it’s a little more complicated. With a short, fixed length of line, tenkara can’t cast for nearly the distance as western fly fishing. The longer length of most tenkara rods help a bit in this regard, but you’re just not going to get 50′ casts.

That’s not to say that tenkara is useless outside of smaller mountain streams. Most fly fishermen are used to wading into rivers to hit the right spot. With a tenkara rod, you’ll just need to get a little closer than you might normally have to.

On the other hand, tenkara is very highly adapted to certain environments. A western fly fisherman with the usual 4/5wt 9 foot rod might find their rod too bulky to carry in a backpack. They might find that the rod is a little too stiff for the smaller fish in a mountain stream. And with hanging branches and thick bushes all around, they might not have the room they need for their usual long casts. You can get many different varieties of western fly rods, including those suited for smaller streams. But many fly fishermen are opting for tenkara because of its advantages in those areas.

For an illustration of just how small a stream you can find trout in, here’s a great tenkara video in what looks like a glorified puddle:

Tenkara rods have become extremely popular among backpackers as the ultimate in portability. A complete outfit can weigh as little as 2-3 ounces and take up very little space in a backpack. And since tenkara rods telescope, there’s no need to worry about multiple sections of a rod jostling around in a pack.

There are telescoping fly rods out there, but they have not become very popular. Instead, most “packable” outfits are composed of many sections, up to 8 or 9. Even those aren’t popular, since their construction doesn’t make for an optimal rod. Overall, western fly fishermen generally have to compromise in performance to get their weight and size down. This is not true for the already lightweight and collapsible tenkara rods.

The most important part of fly fishing is making the fly look like something a fish might eat. The goal in tenkara and western fly fishing is basically the same: make your fly look enticing. They get there in somewhat similar ways, but with some key differences.

“Match the hatch” is the unofficial slogan of western fly fishing. Anglers become amateur entomologists, delving deep into the intricacies of insect life. Then, they meticulously craft flies that match whatever insect trout are eating at any given point. It’s a passion that borders on obsession for many fly fishermen.

Tenkara, on the other hand, takes a more general approach to flies. The traditional flies, called kebari, don’t necessarily look exactly like any particular insect. Instead, tenkara focuses on making them act like insects, with precise presentation methods that mimic how a bug on the water looks to a trout.

That’s not to say that western fly fishers don’t care about presentation, or that every tenkara angler uses just a few flies. With all of the cross-pollination that has gone on, many tenkara advocates are just as obsessed with matching the hatch as their western counterparts. And there have been millions of words and thousands of hours of video created over the years showing a wide variety of presentation techniques for western fly fishing.

I’ve said that many fly fishermen are amateur entomologists, but that’s not all. Ask anyone why they fly fish and you’ll likely get a philosophical treatise on fish, nature, and all kinds of other issues. They’ll tell you about poring over entomology books, spending hours tying their own flies, and honing their techniques on streams big and small. You might even get a sniff at the “bait chuckers” who they see as less dedicated to the craft of fishing. It’s the reason why a lot of spin fishermen look at fly fishing as a sport for snobs. And for some fly fishermen, that’s a badge of honor.

The same is true for a lot of tenkara devotees. The minimalist aesthetic and Eastern origins promote a sort of Zen style of thinking among many of them. You’ll hear about the beauty of simplicity and a connection to nature. They’ll laugh at what they see as over-complication by western fly fishing. Why spend all that money on gear, all that time working on technique, when you could just be fishing? After all, if you can catch a fish without a reel, is the reel really necessary?

This is a hugely subjective area, and one that most depends on personal preference. For some, the perceived simplicity of tenkara is a huge selling point. For others, the intricacies of western fly fishing are part of the fun. You may develop strong opinions. Or, you may decide that, actually, you can see both sides. Don’t worry about agreeing with anyone else, even the big name “experts.” Just find what works for you, and follow your own path.

You may have come here for a definitive answer like “______ is better.” I’m sorry to disappoint you, but there’s really no way of doing that. One size definitely does not fit all in this case. Instead, you should take your own preferences and possible fishing spots into consideration when choosing between the two. And there’s nothing that says you can’t try both!

That being said, there are a few broad guidelines that can help you choose. None of these are hard-and-fast, but in general they accurately describe some main differences.

No matter what you choose, the goal is the same: get out there, and start catching some fish!