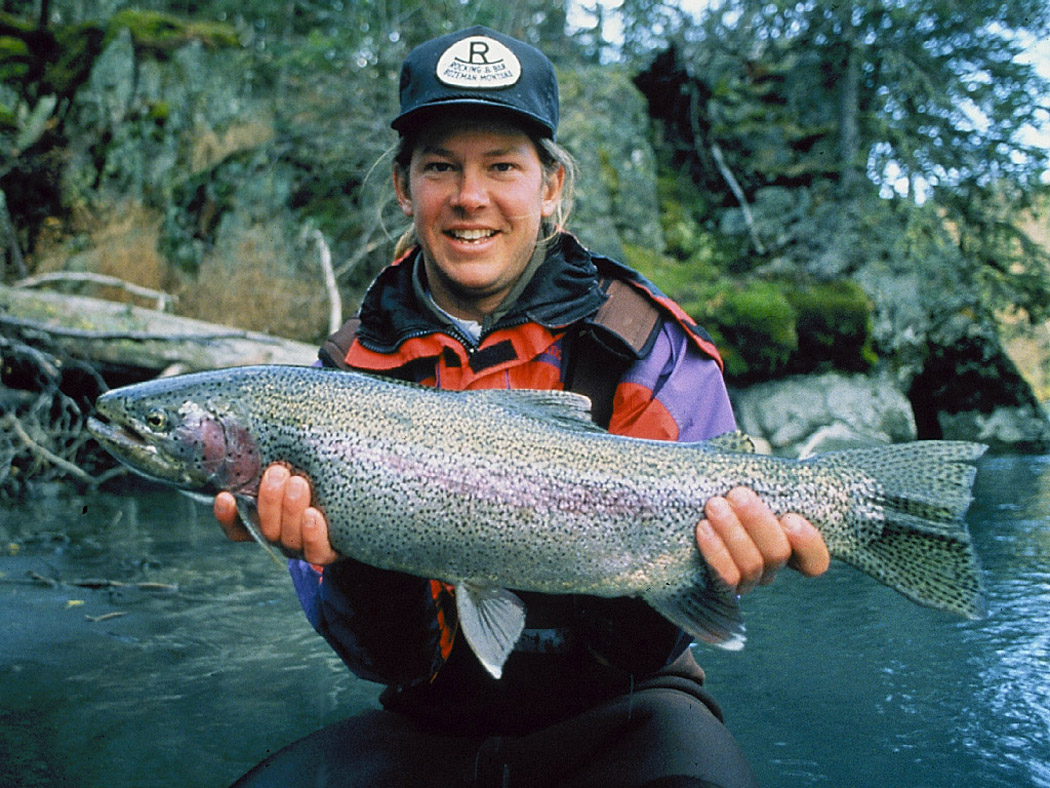 While steelhead and rainbow trout may seem different, they are actually the same species, Oncorhynchus mykiss. Genetically, they are more or less identical. But despite their genetics, the two lead very separate lives.

Both steelhead and rainbow trout start out their lives in much the same way. They hatch out of eggs laid in freshwater streams, rivers, and lakes. “Normal” rainbow trout are perfectly content to stay there, spending their entire lives in the water body they were born in. They start spawning after two years, and most will weigh somewhere in the range of 1-10 pounds.

For some trout, though, a switch flips after 1-3 years in their freshwater habitat. Scientists are still trying to figure out what causes this change, but think it may be due to a mix of genetic and environmental factors. Whatever the reason, these trout start migrating to the sea, and will spend up to five years in saltwater. These are the steelhead. They can grow to be 20 pounds or more. When the time comes, they migrate back to the freshwater areas that they were born in to spawn.

Unlike salmon, steelhead don’t die after spawning, and some end up returning to the ocean. Others stay and spend the rest of their lives in fresh water. In fact, some steelhead never make it out to the ocean in the first place. If a barrier, natural or otherwise, blocks their way, a trout that might have migrated to salt water will stay in fresh water.

Even out in salt water, not all steelhead are created equal. Fishermen have developed a lingo for steelhead that corresponds to the numbers of years spent in salt water.

How to Distinguish Between Steelhead and Rainbow Trout

The difference between steelhead and rainbow trout is an unsatisfyingly fuzzy line. It’s especially so when some areas have different regulations pertaining to steelhead vs rainbow trout. There are, however, telltale signs that can help an angler identify the trout they’ve caught.

None of these characteristics alone is an indication of the fish being a steelhead, but taken in combination they can help identify one or the other. For example, a larger fish with bright colors and a kype that looks relatively unscarred is most likely a steelhead.

This is a very contentious topic among some anglers, so be warned. If you want to get a group of West Coast and Great Lakes fishermen fighting, ask them about the definition of “steelhead trout.” Rainbow trout were introduced to the Great Lakes in the late 19th century and thrived in their new environment. They have established a population that mimics migratory habits of steelhead trout without ever going into the ocean. Instead, the Great Lakes are their massive waterbody of choice.

It’s worth noting again that “steelhead” are not native to the Great Lakes region. They are an introduced species, and their naturally-reproducing numbers are supplemented by a strong stocking program. When it comes to official recognition of steelhead for ecological and conservation purposes, they do not count. In fact, the argument is sometimes made that they are invasive and should not be promoted over trout native to the area.

A lot of you reading this are not into fishing at all, you’re just hungry. You’ve gone to the supermarket before and noticed that “rainbow trout” is usually sold either in smaller fillets or as whole gutted fish, while “steelhead trout” is usually cut into thicker fillets or steaks. What’s the difference, you might ask?

Well, like everything about steelhead and rainbows, it’s complicated. Most trout that you’ll find at the supermarket is farmed. That means that the distinction between their migratory habits is moot. The main difference seems to be size. Farmed “steelhead” are grown in much the same way as salmon. They’re bigger, with deeper pink flesh, and are often raised to taste very much like salmon. To this end, many farmed steelhead are, like salmon, grown in salt water. However, there is no regulation in the US regarding the “steelhead” name, so there is no one way that steelhead is grown.

You can adapt most salmon recipes for steelhead trout, since the taste is very similar. If anything, steelhead will have a milder, less “fishy” taste than salmon. It’s becoming increasingly popular as a more affordable and sustainable option than farmed salmon, so you may start seeing it more in your local supermarket.

The “rainbow trout” trout label is usually used for smaller fish raised in fresh water. That means thinner fillets or whole fish, and the flesh is often a paler pink. The flesh is less “fishy” overall, but may have a gamier “muddy” quality to it much like some catfish. If you’re worried about this muddy taste, lemon juice can help counteract the compounds that cause it.

Steelhead and rainbow trout are two different varieties of the same fish. They often coexist in the same waterways, and it can be difficult to tell the two apart. However, their lives and physiology can be very different. There’s something to be said for the old line from US Supreme Court Justice, “I know it when I see it.” Catch enough of both, and you’ll start to get your own eye for the difference!